Tetilla is a creamy and mild semi-soft cow’s milk cheese aged 15-20 days. Shaped like a breast, it is actually modeled after a cow’s teat, an homage to the plethora of cows in the region. They feed on the abundant pastures throughout the area near the creamery. Our Tetilla is made by a family-owned company, Queserías del Eume, that specializes in cow's milk cheeses. Cheesemaker Ana Prieto has been making cheese since 1990, but took over as manager more recently as her parents' generation retired. 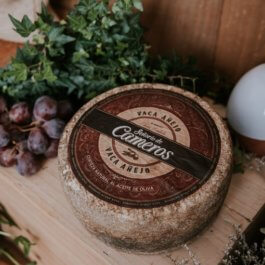