Today, June 10, is Dia de Portugal, Portugal’s national holiday. It is formally known in Portugal as Dia de Camões, de Portugal e das Comunidades Portuguesas (“Day of Camões, Portugal, and the Portuguese Communities”) and commemorates the death of poet and literary figure Luís de Camões. In addition to celebrations within Portugal, Portuguese communities outside of the country, in Canada, the United States, the United Kingdom, and more, also mark the occasion. We thought we’d join in with some of our Portuguese cheeses and specialty foods because what’s a party without food? Feliz dia de Portugal! 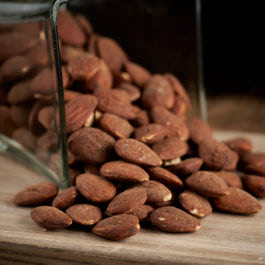 Our newest Portuguese cheese is Ilha dos Misterios, a washed rind cow’s milk cheese from the island of Pico. It is mildly pungent with a texture between an amanteigado (soft) and semi-soft cheese. As it ages, it gets funkier, with stronger notes of mushroom.

Ovelha Amanteigado is a unctuous and vegetal raw sheep’s milk cheese beloved for its unique flavor that comes from the use of thistle rennet. We love to warm it up at room temperature for several hours, then slice the top off and dip bread, crackers, or veggies in the oozy cheese.

Portuguese olive oil may be lesser known than oil from Italy or Spain, but it’s no less spectacular and is worth seeking out. Esporão, one of the country’s finest wine producers, also makes several fantastic extra virgin olive oils. Ana, the woman in charge, blends uncommon varietals like Galega, Cordovil, and Verdeal with ease and presses the oils in their 100% sustainable olive mill.

The Douro Valley, where our Douro Almonds are grown, is a very fertile area of Portugal. These oil-rich almonds, a mix of Masbovera, Glorieta, and Constanty varietals, are uniquely sweet, earthy, and irresistibly crunchy. They are fried and unsalted. Our connection with the Canary Islands How to Make the Perfect Mother’s Day Cheese Board